Akwa Ibom State, with capital at Uyo, derived its name from the Qua Iboe River. It was created on September 23, 1987 out of the old Cross River State by General Ibrahim Babangida’s military dictatorship.

Akwa Ibom State is located in the coastal south-east part of Nigeria, lying between latitudes 40321 and 5o331 north, and longitudes 7o251 and 8o251 east. The state is bordered on the east by Cross River State, on the west by Rivers State and Abia State, and on the south by the Atlantic Ocean. It encompasses the Uyo, Eket and Abak divisions of the defunct Calabar province. Ikot Ekpene, Abak, Eket, Ibeno are other prominent cities in the State.

Whereas Akwa Ibom is credited with a resident population of about 5 million, it is also reputed to have about 10 million persons indigenous to it in the Diaspora. Majority of the state’s resident population are engaged in agricultural activities. The climate of the state is favourable to the cultivation and extraction of agricultural and forest products such as palm produce, rubber, cocoa, rice, cassava, yam, plantain, banana, maize, and timber.

Akwa Ibom is also endowed with natural resources. In fact it is one of the top three producers of crude oil in Nigeria. Other natural resources found in the State include limestone, clay, natural gas, salt, coal, giver nitrate, and glass sand.

Currently, the State currently owes its legal existence to the provisions of the Constitution of the Federal Republic of Nigeria. As a State, it is constitutionally mandated to establish: 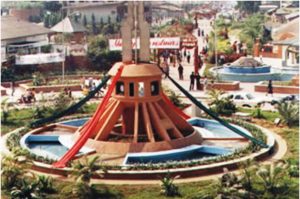