Kaduna State, with capital in Kaduna, is the home of one of the well-established ancient cultures of Nigeria – the Nok Culture.

As a State in independent Nigeria, Kaduna State was first created in 1976, as a replacement for the defunct North Central State created on 27 May 1967.

The State is situated on the southern part of the High Plains of the northern parts of Nigeria. It lies between parallels 9o03’N, and 11o32’N, and extends from the upper River Mariga on 6o05’E to 8o48’E on the foot slopes of the scarp of Jos Plateau. The total land area of the State is 48,473.2km2. To the South-west, the State shares a border with the Federal Capital Territory, Abuja, Nassarawa State is to its south, Bauchi and Plateau States to the east, Niger to the west, while Zamfara, Katsina and Kano States take up its northern boundaries positioning it as a communication and economic hub.

The population of Kaduna State according to the National Population Commission is 6,113,503- Male: 3,090,438; Female: 3,023,065. About 80 percent of the people of Kaduna are engaged in various agricultural activities producing cash and food crops including yam, cotton, groundnut, tobacco, maize, beans, guinea corn millet, ginger, rice and cassava. Over 180,000 tonnes of groundnut are produced annually in Kaduna State. Animal husbandry is also widely practiced in the State.

It has an  executive headed by a Governor, a judicial arm led by the Chief Judge and a legislature, Kaduna State House of Assembly, made up of 34 members. The State is divided into 23 local government areas for easy administration.

Currently, the State owes its legal existence to the provisions of the Constitution of the Federal Republic of Nigeria. As a State, it is constitutionally mandated to establish: 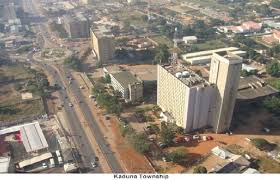 Sources of Law for the Kaduna State Legal System include: