Oyo State, with Ibadan as capital, was created alongside Ogun and Ondo States on 3 February, 1976 out of the old Western State by the military dictatorship of General Murtala Mohammed. In 1991, Osun State was created out of a part of it.

Located in the south western parts of Nigeria and covering a total land area of 28,454km2. Oyo State’s northern border is taken up by Kwara State, Ogun State is to its south, Osun State to the east and to is an international border with the Republic of Benin.

The population of Oyo State according to the National Population Commission is 5,580,894- Male: 2,802,432; Female: 2,778,462. Agriculture remains the dominant economic activity in the State employing a large number of its population. Cocoa, kolanut, cashew nuts, citrus fruits, palms and rubber are the main tree crops cultivated in the forest zones in the southern parts of the State, yam and cassava represent the major root crops, while maize is the predominant cereal cultivated in the savannah areas of the State. Lumbering is also a source of income for the State government. Major trees found in the State include Mahogany, Obeche, Opepe, Iroko and Afara. Cattle rearing is also practiced to a relatively large degree.

Oyo State is recognized for its many landmarks. These include the first university in Nigeria— the University of Ibadan (1948) which was initially founded as a college of the University of London becoming autonomous in 1962; the first teaching hospital in Nigeria, University College Hospital; the internationally recognized International Institute of Tropical Agriculture (lITA); the first skyscraper in Africa named the Cocoa House in honour of the dominant cash crop of the entire Western Region that Ibadan once played capital to; the first television station in Africa, NTA , Ibadan and the Liberty Stadium, the first stadium in Africa. 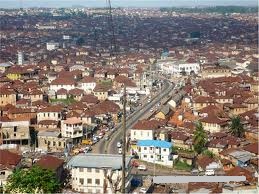 Currently, the State owes its legal existence to the provisions of the Constitution of the Federal Republic of Nigeria. As a State, it is constitutionally mandated to establish:

Sources of Law of the Oyo State Legal System include: